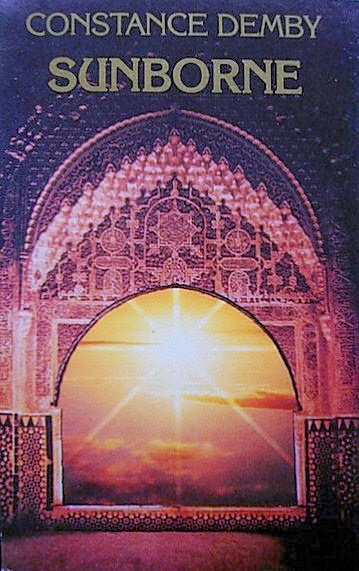 I've been sick as a dog since late Thursday night. Here are the gentle, cosmic sounds that I'm listening to while awaiting the sweet release of death.

Track listing:
1. The Dawning
2. Darkness of Space
3. Lift Thine Eyes
4. Sunborne
5. One with the Light 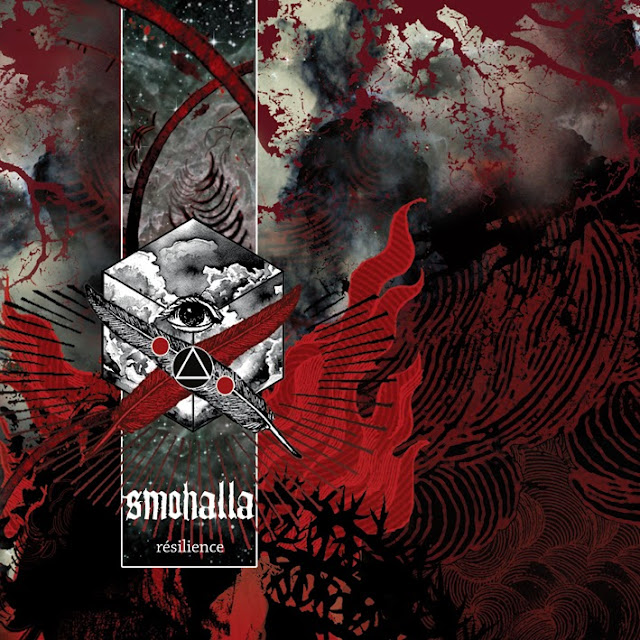 Unorthodox, industrial-tinged French black metal. Smohalla's sound is chaotic and cerebral -- a densely layered cacophony of guitars, multi-faceted keyboards, and vocals that range from low growls to high-pitched shrieks to reverb-y clean singing. Same school of black metal as their fellow countrymen Blut Aus Nord, but their sound is their own. It's a diverse set of highly intricate songs, and though you may immediately find Résilience to be rewarding, it will probably take you a few listens to really get your head around it.

Astral cynicism
Posted by DEAR_SPIRIT at 8:48 AM 2 comments: 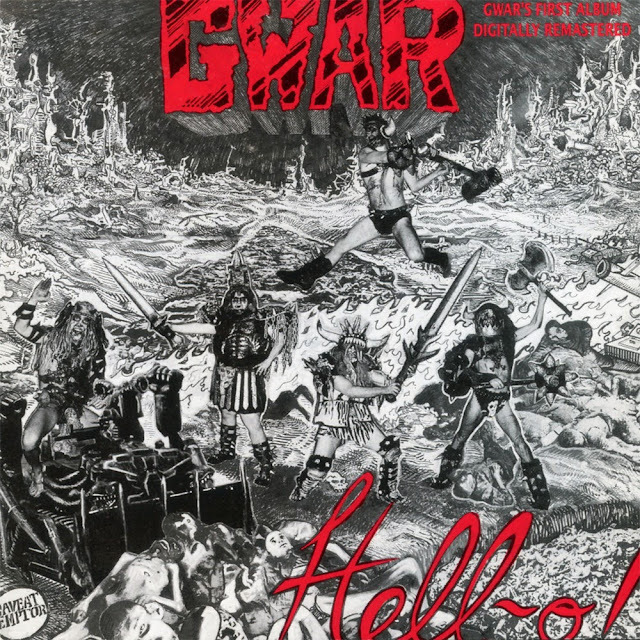 
Sun goes down, bodies on the ground
Swollen with pus, I shall further expound
As the vultures swirl, the batons twirl
We've come for your entrails.
Posted by DEAR_SPIRIT at 12:05 PM 1 comment: 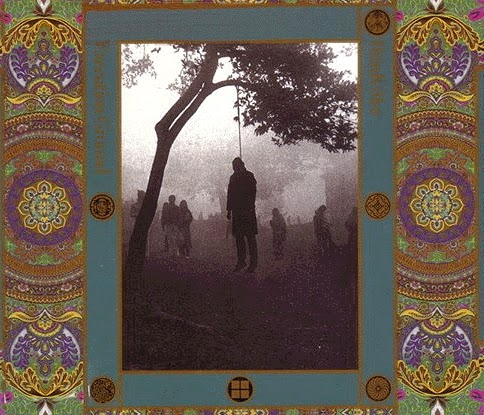 The final studio album from the brilliant Painkiller, a trio composed of John Zorn, Bill Laswell, and Mick Harris (of Napalm Death and Scorn). Execution Ground's first disc represents an excellent melding of the freeform jazz-grind that those familiar with their early material might expect, and murky, dissonant dub. The second disc drifts further into the aether with ambient, soundscape-y reinterpretations of two songs from the first. Shrieking saxophone, disjointed drums, inhuman howls, pulsing bass, and samples -- all given a delay- and reverb-heavy dub treatment. Awe-inspiring psychedelic music. This version includes a third disc - a live recording from a show in Osaka - that's more musically in line with their first two records. 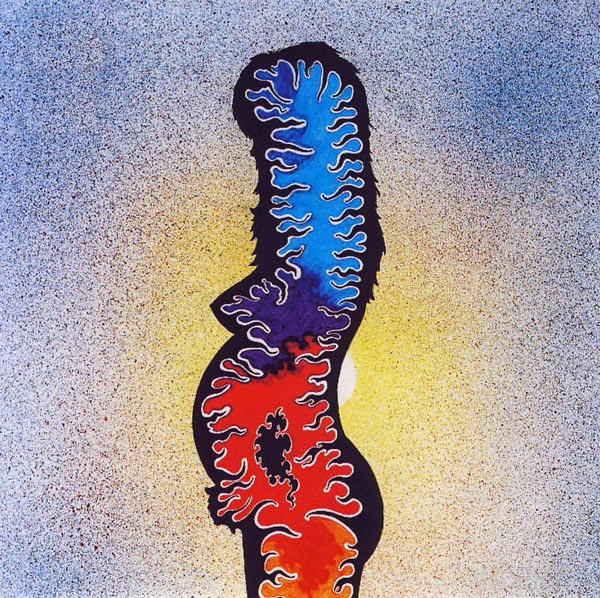 Some heavy, downtempo Swedish prog/psych rock. The bluesy psych numbers are balanced by some maudlin, piano-driven, almost Trafalgar-esque songs ("Nobody Was There to Love Me", "Every Man", "Once Upon a Time") and a few really well done instrumental shorts. Good stuff. This reissue presents the album in punchy, remastered form, and tacks on three bonus tracks.

I touched the sky
And it was smiling at me
As I walked through the door to eternity
Posted by DEAR_SPIRIT at 12:46 PM 1 comment: 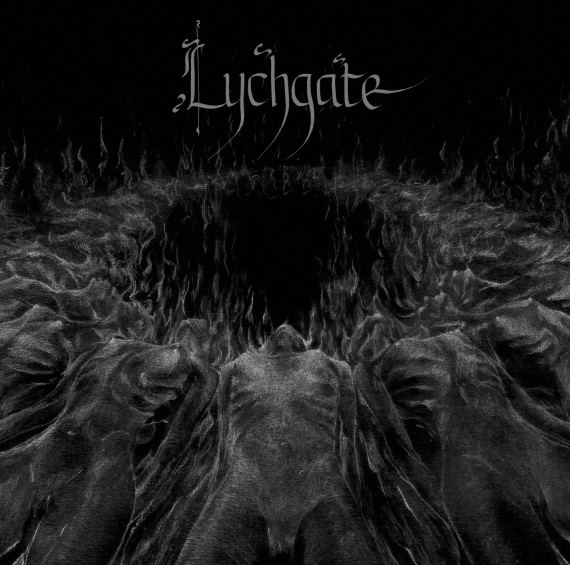 Track listing:
1. The Inception
2. Resentment
3. Against the Paradoxical Guild
4. In Self Ruin
5. Sceptre to Control the World
6. Intermezzo
7. Triumphalism
8. Dust of a Gun Barrel
9. When Scorn Can Scourge No More

We vomit upon the rudder of imposed destiny
Posted by DEAR_SPIRIT at 12:54 AM 4 comments: 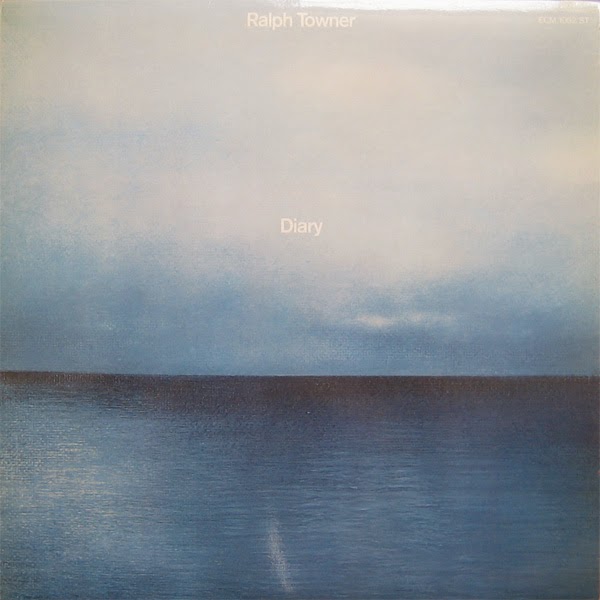 First fully solo album from American guitarist Ralph Towner. Tranquil but buoyant compositions for piano, twelve-string and classical guitar, performed entirely by Towner alone. I've heard almost all of his albums, and this is probably my favorite.

Sipping the past
Posted by DEAR_SPIRIT at 1:48 AM No comments: 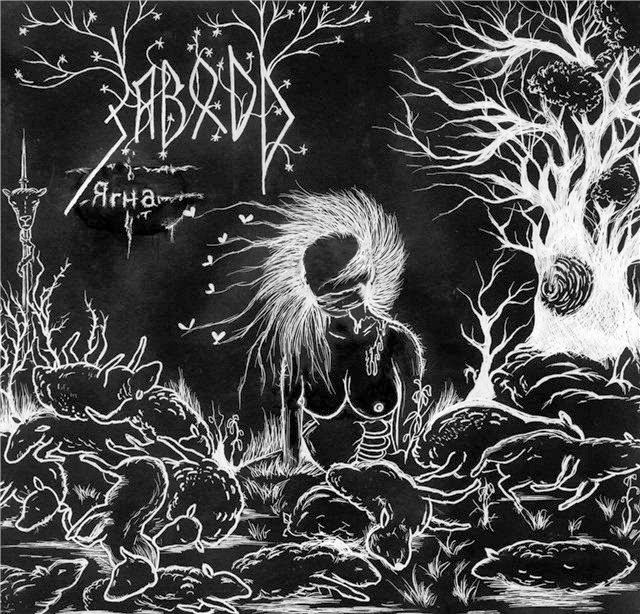 Заводь confuse the shit out of me, starting with the fact that I have no idea how to even begin pronouncing their name. Furthermore, because all of their lyrics are Ukrainian, I have no idea what their politics are, and, when considering Ukrainian black metal, you're more often than not going to run into some racism. So on one end, they have referred to themselves as "blackened crust punk" (RE: crusty album cover), and distance themselves from their Ukrainian black metal peers, calling them "clowns" and alluding to the idea that they are opposed to their political ideologies. On the other end, as of 2011, a member of (prominent sketchy Ukrainian BM band) Astrofaes is their drummer. AND, said member was also in Ungern, who are straight-up, unabashedly racist. Can anyone shed some light on this matter?

Regardless, this is really great raw, folk-ish, punk-ish black metal, very much along the same lines of the almighty Horna. Заводь are fully committed to their sound, and there is absolutely no deviation -- no intros, no acoustic interludes, no post- elements -- just pure, black fury. 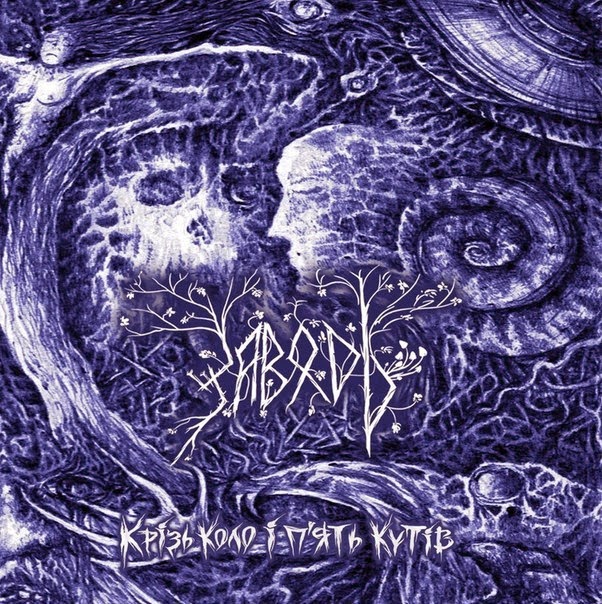 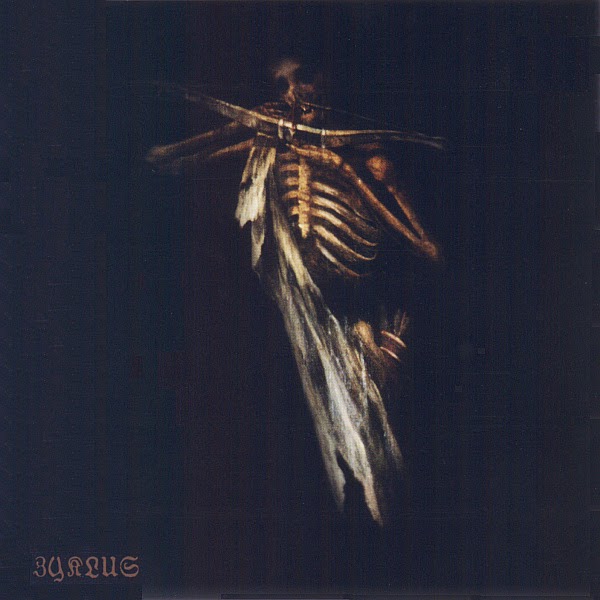 Masterful German black metal. Highly repetitive, dense and atmospheric, yet brutal, raw, and nearly devoid of melody. Zyklus might be Lunar Aurora's least accessible outing; it's also one of their strongest.

Cycle
Posted by DEAR_SPIRIT at 12:04 AM No comments: 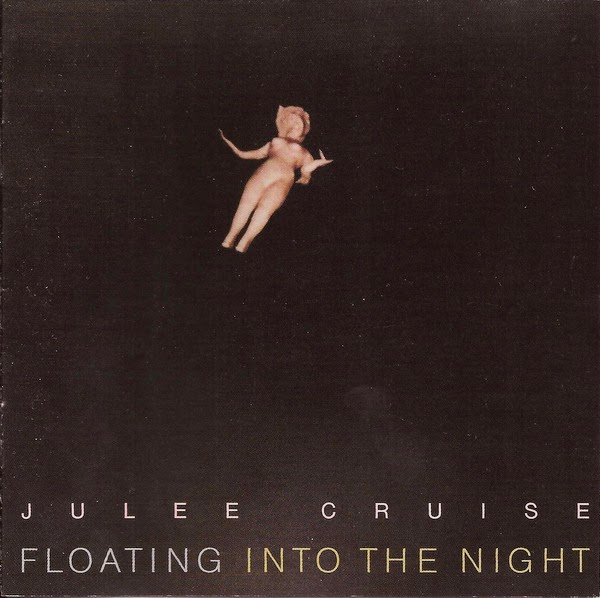 Two essential albums of ambient, lounge-y vocal jazz. Angelic, reverb-drenched vocals drift over sparse drums, lush synths, and jazzy horns. Written by David Lynch and Angelo Badalamenti, music from these albums was featured in the show Twin Peaks (the show's opening theme is an instrumental version of "Falling") as well as in the movie, Twin Peaks: Firewalk with Me, and as one might expect, it's quite beautiful and melodramatic, but subtle and not-so-subtle instances of harmonic dissonance make it as skin-crawling as it is soothing. I cannot recommend these albums enough, ESPECIALLY if you're a fan of Twin Peaks/David Lynch who has somehow slept on them. 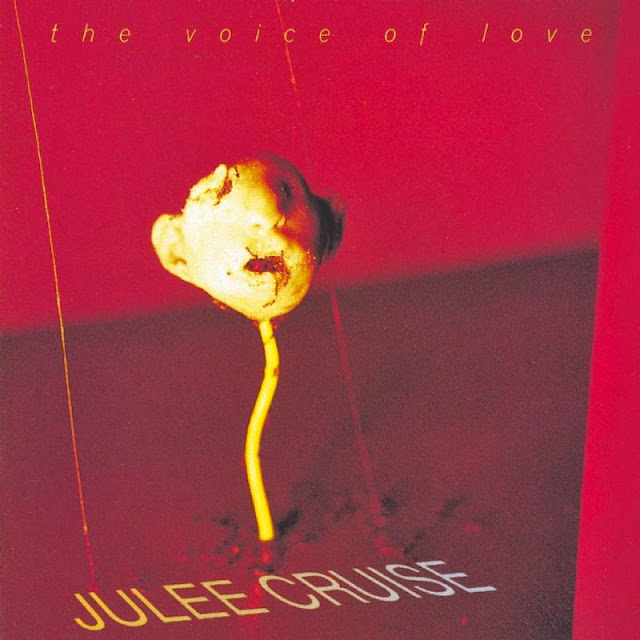 What you're thinking through the silence
Posted by DEAR_SPIRIT at 1:55 AM 1 comment: 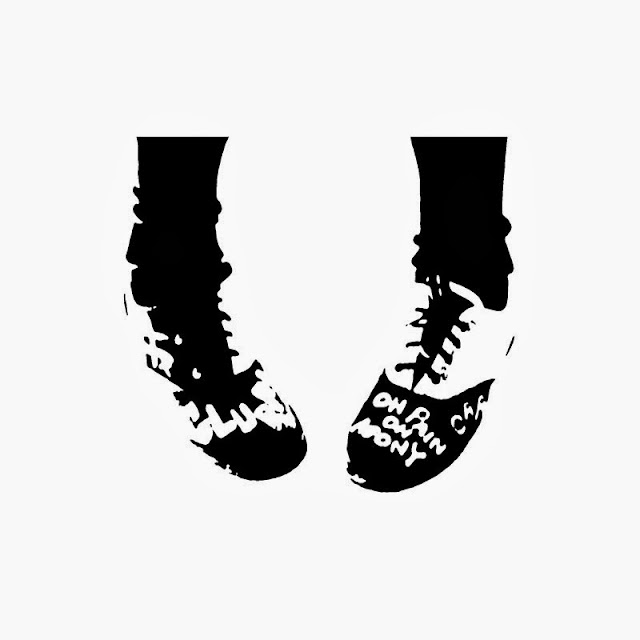 Some downcast, heavy SF shoegaze for your Sunday. There's a rawness and anger bordering on hardcore/metal at work on Adore -- some screaming here, some double kick there, and is that a blastbeat? -- but, at its heart, this might actually be an emo record that got buried in distortion, feedback, and reverb.

Heaven with you
Posted by DEAR_SPIRIT at 12:30 PM 1 comment: 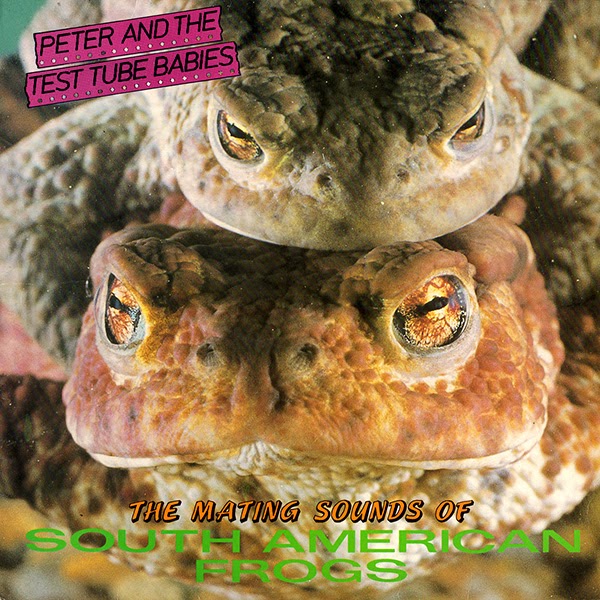 Welp, apparently, Peter & the Test Tube Babies are WAY better than I remember. This record is, anyway. I listened to them a bit in high school, saw them once in DC, and I could've sworn they were a bunch of boneheads. What's with all these minor key leads? Are those acoustic guitars? Who's that lady singing backups? And where are the lyrics about being "the boys" who are "out to fight" or whatever? Anyway, as muscular yet melancholic as Mating Sounds is, I'm guessing that it's doing some ghostwriting for a few of the hip throwback punk bands in my lovely city, and furthermore, I'm willing to bet that there are people who think that it's one of the best punk records of all time. EDIT: Yup, Razorcake does.

We'll burn everything in sight
We'll even set you alight
We live for the fire and flames
Posted by DEAR_SPIRIT at 7:47 PM 2 comments: 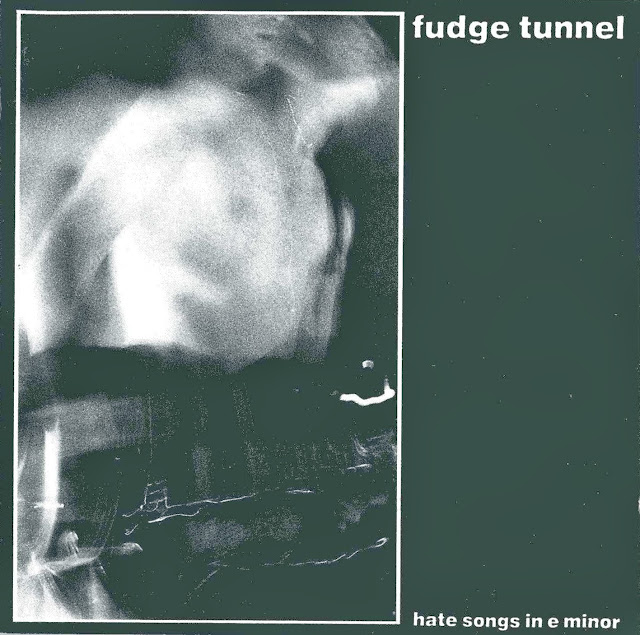 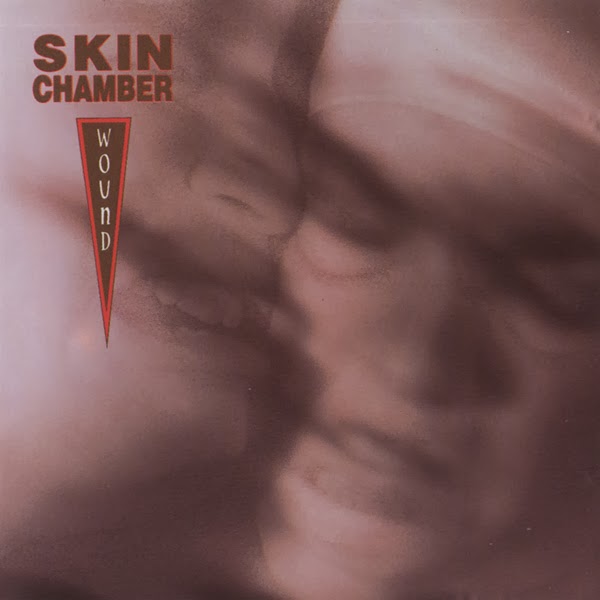 Ladies and gentleman, Skin! Mother! Fucking! Chaaaaamberrrrrr! Holy shit. They're like a more grueling, unpleasant version of Godflesh, or a more doom metal-oriented version of early Swans, and anyone who likes either of the aforementioned bands, or slow, heavy, difficult music in general, absolutely needs to hear both of these records. Skin Chamber is easily one of the raddest bands that the once-great Illogical Contraption blog (their podcasts are rad, but the blog has been more or less nonexistent since 2011 or something) brought to my attention, and because those links are long dead, I feel that it's practically my duty to re-post them. Spread the pain. 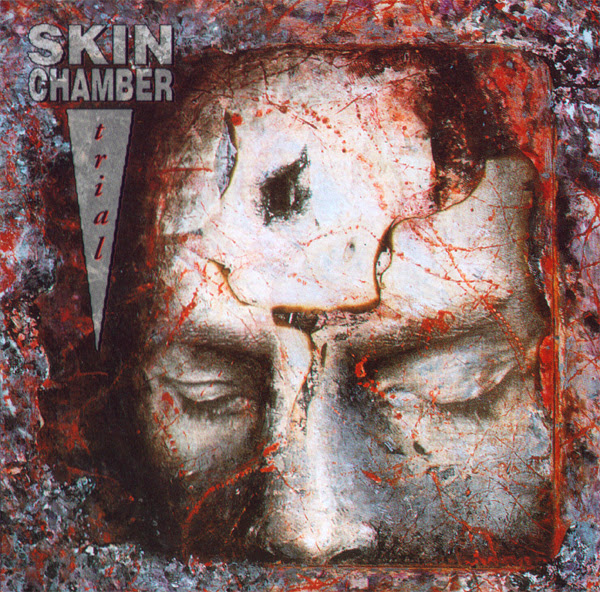 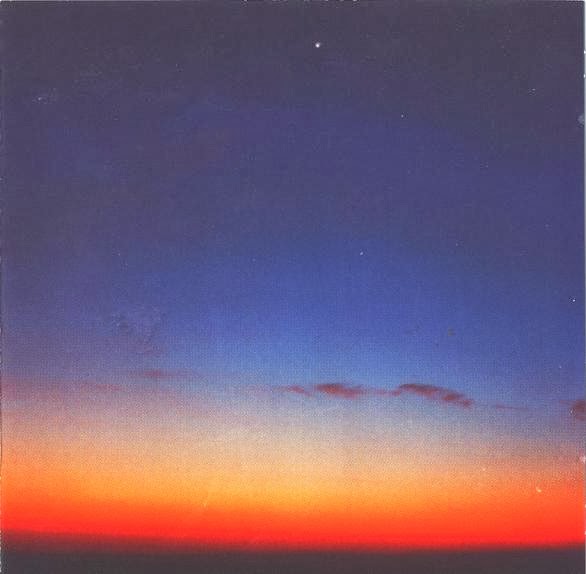 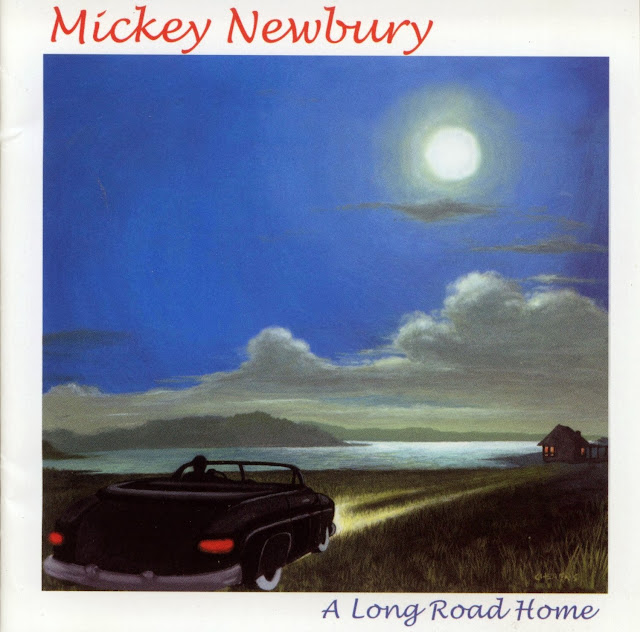 Tearjerking country from sadly departed country great Mickey Newbury. A Long Road Home is the last album that Newbury completed before his death in September of 2002, and his preoccupation with mortality and half-bitter, misty-eyed retrospection certainly gives the listener the impression that he knew that it might be his final musical statement. His gentle picking and quavering voice are given a lush backdrop of violin, cello, synthesizer, banjo, mandolin, piano, and ethereal backing vocals. While all of the songs are strong, the real gems here are the over 10-minute-long first and penultimate tracks, each of which is an incredible showcase of weatherbeaten, downcast, big-hearted, bittersweet songwriting.

Hoist the sails, Bud, to hell with the breeze
Prayed for a wind that will bend every tree
And a storm that will bring every man to his knee
Here's to the howlin' sea
Here's to tomorrow, and here's to today
Here's to whatever I never could say
Here's to the piper, the bastard's been paid
Posted by DEAR_SPIRIT at 11:39 AM No comments: 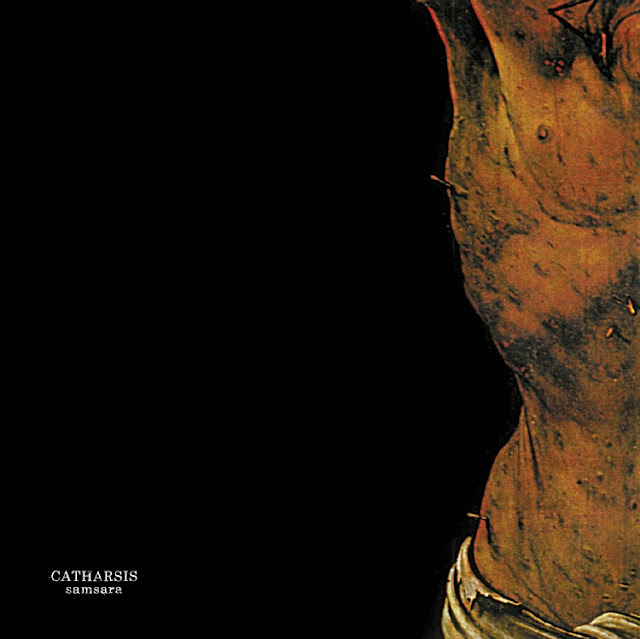 Sure, Catharsis was heavily involved with Crimethinc., one of the most notorious havens for white foolishness in the history of the anarchist punk scene (itself a notorious haven for white foolishness). Sure, their vocalist treated their shows as platforms for extended, semi-coherent political rants that bothered and bored everyone. And sure, when other bands were playing, he was known to, in at least one instance, stand at the front with his back to the band, arms crossed, glaring at the audience. Sure.

But none of that takes away from the fact that Catharsis' music -- metallic hardcore with hints of emoviolence, sludge, and psychedelia -- is some of the best to ever come out of the American crust/hardcore underground. Their first LP of two, Samsara is a concept record based entirely on anti-Christian philosophy, and I listened to it probably about 100 times between the ages of 16 and 17.

Because I'm so great, I'm including the awesome, nearly ten-minute "Arsonist's Prayer", which was released as one side of a split EP with Newborn, about whom I know nothing. You're welcome, baby, you know I treat you right.

Track listing:
1. Invocation: One Minute Closer to the Hour of Your Death
2. Exterminating Angel
3. Bow Down
4. Choose Your Heaven
5. Every Man for Himself and God Against Them All
6. Sacred and Profane (The Carnal Prayer Mat)
7. ...In Solitary
8. Pariah
9. Choose Your Heaven
10. The Evolution of Dying
11. I Corinthians 1:18-29 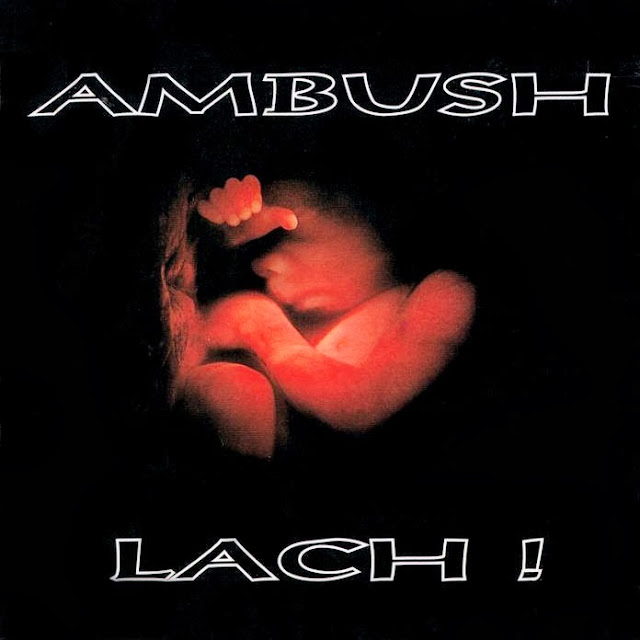 German experimental crust. I use the term "crust" loosely, as this is some truly bizarre, druggy heaviness that, in my opinion, has more in common with Melvins than it does with Amebix. The vocals and questionable musicianship say "crust," but the extended walls of droning feedback, noisy delivery, thunderous percussion, hypnotic sludgy-ness, and understanding of subtlety say otherwise. Anyway, who cares, Lach! is dope, and anyone who likes heavy music should shit their pants over "Violeure" - sounds like the vocalist for Contropotere fronting Bullhead-era Melvins.

Sites of pain
Posted by DEAR_SPIRIT at 1:51 AM 1 comment: 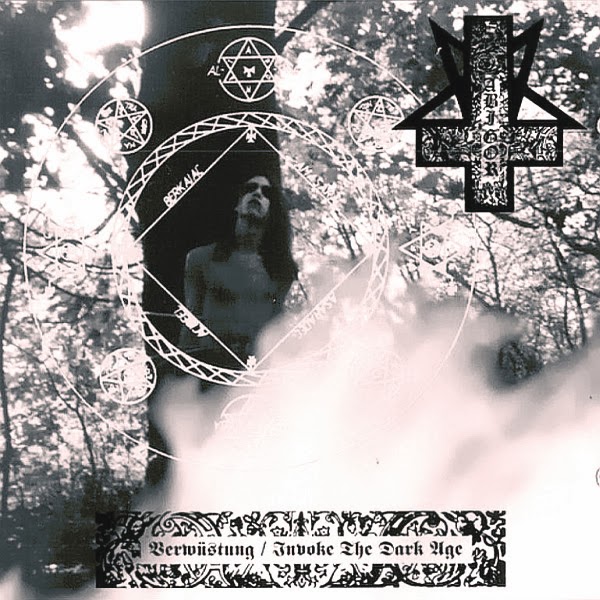 God-tier, early Austrian black metal. Epic, brutal, weird, melodic, ugly, perfect, essential. Verwüstung / Invoke The Dark Age is Abigor's first album, and though they've released a whole bunch of phenomenal albums since this one, no one would look at you funny if you called it their best.

Track listing:
1. Universe of Black Divine
2. Kingdom of Darkness
3. Beneath a Steel Sky
4. Eye to Eye at Armageddon
5. In Sin
6. My Soft Vision in Blood
7. Weeping Midwinter Tears
8. Diabolic Unity
9. A Spell of Dark and Evil

I face the eternal winter
Posted by DEAR_SPIRIT at 12:00 AM 3 comments: 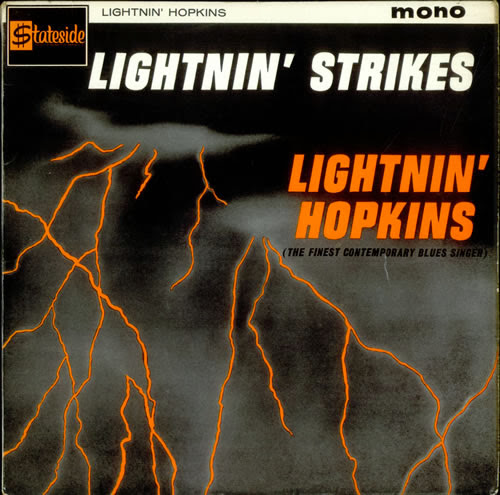 Hands-down, my favorite blues album. There are a couple of (awesome) full band tracks, but it's mostly just the man and his guitar, wailing his pain into the night sky. It's stripped down, the recording's blown out, and ample use of reverb gives the whole affair a haunted, nocturnal feel. So good it hurts.

Track listing:
1. Got Me a Louisiana Woman
2. Want to Come Home
3. Please Don't Quit Me
4. Devil Is Watching You
5. Rolling and Rolling
6. War Is Starting Again
7. Walkin' Round in Circles
8. Mary Lou
9. Heavy Snow
10. Coon Is Hard to Catch

There ain't nothin' that the Devil can't do
Posted by DEAR_SPIRIT at 11:29 AM 4 comments: 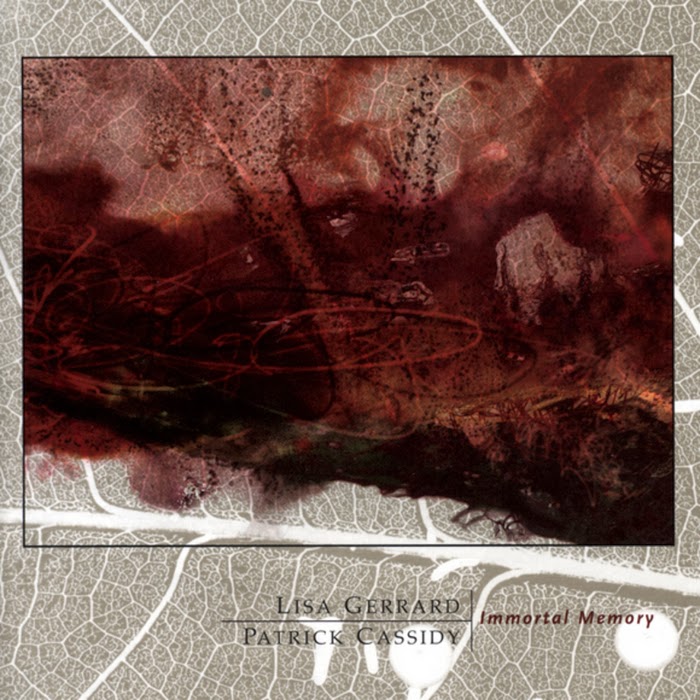 A breathtakingly gorgeous collaboration between Lisa Gerrard of Dead Can Dance and Irish composer Patrick Cassidy. Cassidy's dramatic, stately, symphonic arrangements prove a sublime foil for Gerrard's indescribably powerful, sorrowful voice, and the resulting album is possibly the most satisfying of her many post-DCD efforts. Highly recommended.

Tempest
Posted by DEAR_SPIRIT at 1:44 AM 4 comments: 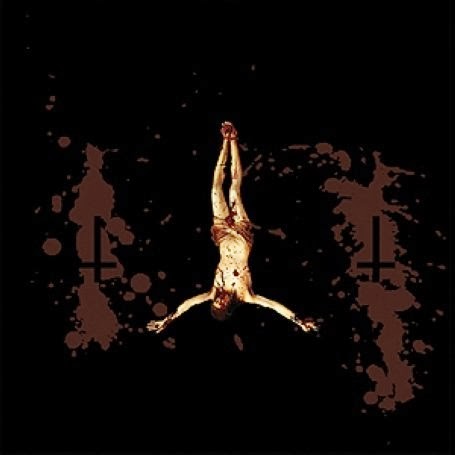 Started as a side-project for members of Incantation, Profanatica was one of America's first black metal bands. They broke up in '92, then reformed sometime in the mid aughts. The Enemy of Virtue compiles pretty much all of their pre-breakup releases, plus some unreleased studio and live material. Filthy, lo-fi blasphemy. Profanatica are one of those bands that never say anything openly racist (on record, anyway), but have a way of unnecessarily pointing out that Jesus was a Jew that makes me uncomfortable. Because I'm lazy, you can find the track listing here.

Lungs of hell, burn the heavens
Posted by DEAR_SPIRIT at 12:10 PM 1 comment: