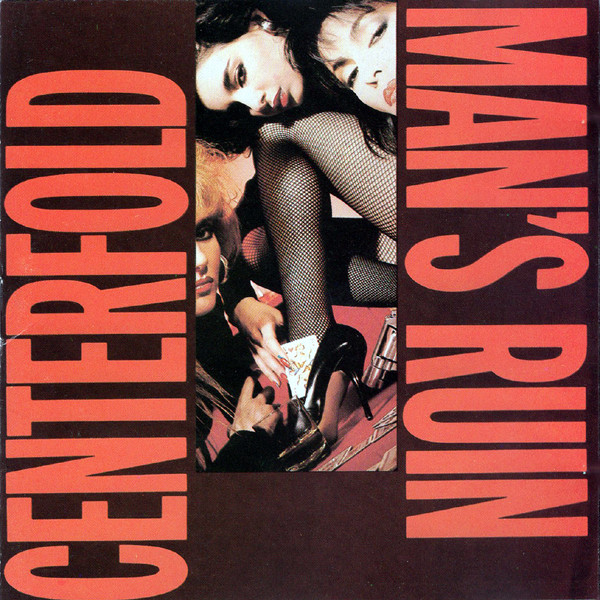 [Due to Apple's Music app being an unwieldy, glitch-ridden load of shit, and my school term really ramping up here at the end, I am unable and unwilling to spend a lot of time on this dumb blog. So until something gives, I'll be going through my draft archives, looking for posts that I already prepped but, for whatever reason, never posted. Enjoy.]
First and only LP by this weird confluence of commercialism, horniness, and pop chops. Centerfold were a Dutch trio of vocalists/models whose songs dealt primarily in sexual innuendo via a Madonna-esque mix of synthpop and pop rock, and who promoted their first single with a spread in Dutch Playboy and a nude performance on TopPop. So yes, obviously, it's a big, sweaty product of 80s coke culture, and if you, say, commented "God I hate the eighties" on my Dolphin Brothers post, this ain't gonna change your mind. But if you like trashy 80s pop/rock: I swear, Man's Ruin is a non-stop parade of bangers. And there's not a slow jam in the bunch; the closest they come is the shimmering, pulsing "Intimate Climate".
Track listing:
1. Up and Coming
2. Note After Note
3. Dictator
4. Rough
5. Come Get My Love
6. Radar Love
7. Sweetness
8. Dirty Mind
9. Intimate Climate
10. Dancing in Your Arms
She's tight inside, if you know what I mean
She's got places in there no man's ever been
If you like this, check out:
The Flaming Hands - The Flaming Hands (1984)
Teena Marie - Starchild (1984)
Posted by DEAR_SPIRIT at 5:13 PM