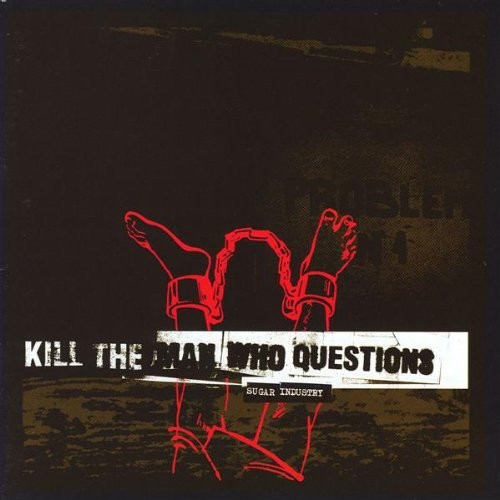 Philly political hardcore. I first heard Kill the Man Who Questions through the great Punk Uprisings Vol. 2 comp, on which their song "Your Backlash Against a P.C. Hysteria Is a Fucking Joke" was a personal favorite. I tracked down Sugar Industry via mail order, and it became something of a formative record for me. One track in particular felt like a revelation to me: "You Say It's Your Birthday", a haunting, seething spoken-word piece about the brutal hypocrisy of the pro-life movement delivered over an uneasy, stuttering instrumental. Also, I put "Good Cop, Bad Cop" on a bunch of mixtapes. It's the kind of vaguely arty, anarcho-90s-hardcore that at this point is hopelessly unfashionable, but fuck off, I'm old.
Track listing:
1. Sugar Industry
2. A Study in Elitism
3. White Face
4. You Say It's Your Birthday
5. Where's the Alternative
6. I Apologize for My Hunger
7. Coatrack
8. And You Say You Own It
9. Senior Portrait
10. Census
11. Work Ethic
12. There Will Be No Amnesty
13. Because I'd Probably Fucking Wet Myself
14. Good Cop, Bad Cop
15. Preaching to the Converted
Squeezed out of a crotch, slapped twice on the ass, and cut from the womb. Nine months after conception, you'll start to learn that the political vigilance paid to your so-called rights is now lost as an abstract idea in a sea of hectic human shit. Those that rallied for your birth now offer their sincerest "who-gives-a-shit"s in all your post-natal endeavors. You may not learn the names of those that bravely fought for your rights as a fetus. Perhaps one day, forget the selfless men and women who through prayer, blockade, and clinic harassment you owe your life. So will they conveniently forget you when you're starving in government housing? No, better yet, jail? No, better still, abused by foster parents, totally unemployable with a $200 a day addiction? No, best yet, bleeding to death in a bathroom, clutching a coat-hanger while their war wages on.
Records that had a similar impact on me around the same time:
Born Against - Nine Patriotic Hymns for Children (1991)
Aus-Rotten - The System Works... for Them (1996)
Posted by DEAR_SPIRIT at 7:38 AM