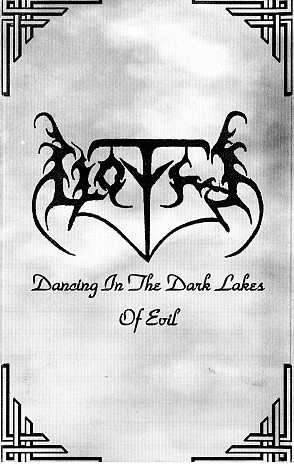 Cult Hellenic black metal. This demo is the only release by the original, all-female power trio incarnation of the band, before they renamed themselves Astarte. (Following vocalist/guitarist Tristessa's untimely passing in 2014, her husband reformed Lloth with an all-new lineup.) All in all, you're looking at four tracks of icy, lo-fi second-wave glory, and four ambient instrumentals -- one of which is the longest track on here -- that will have you dungeon synth nerds crying like an orc.
Track listing:
1. Intro
2. The Offering...
3. Empress of the Shadow Land
4. ... In the Weep of the Ocean
5. Mournfull
6. Satisfaction of the Dead
7. Reaching the Palace
8. Outro
Oh, starry night!
This is how you wished to die
More great demos:
Nidhoggr - Ravens Over the Road of Kings (1994)
Wintermoon - Reh. Demo 1/1995 + The Mightiest Stand Above (1995)
Posted by DEAR_SPIRIT at 11:05 AM