Kataklysm - The Prophecy (Stigmata of the Immaculate) (2000) 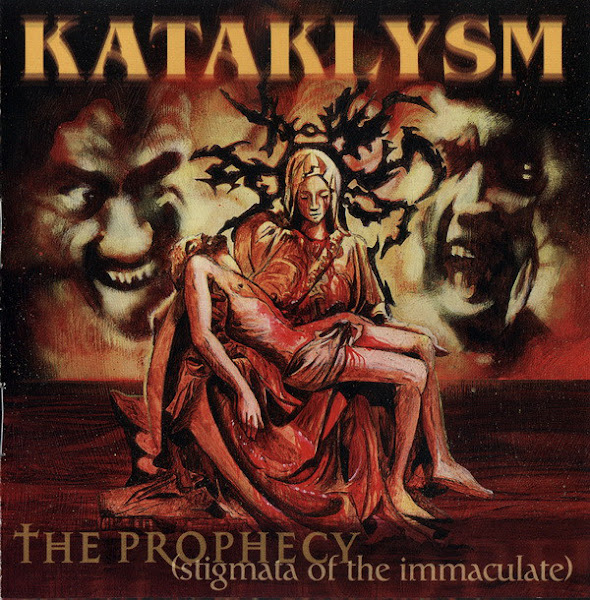 Previously on OPIUM HUM:
Kataklysm - The Death Gate Cycle of Reincarnation (1992) + The Vortex of Resurrection (1993)
In which Canadian death lords Kataklysm jump headfirst into their own skewed version of melodeath. Hyper-blasts; tremolo-picked riffs that at times come off as blackened; hoarse, shouted vocals that can be a dealbreaker for some listeners; some chugging, core-ish moments; and an overarching concept involving demonic/alien invaders bringing about the end of the world, which taps into turn-of-the-millennium anxiety surprisingly effectively ("1999! 6661! Turn of the millennium! The end is coming!")
Speaking of dubious old favorites: I first got into Kataklysm when I was 17, via this slightly older hesher dude I used to hang out with who found it unacceptable that I liked Darkest Hour so he made me listen to "Astral Empire"; it didn't convince me to stop liking Darkest Hour (I still do, fight me), but I dug it. Then when I got the rest of The Prophecy off of Napster, I loved that, too, and listened to it 400 times while taking bonghits in my bedroom.  So despite its status as one of Kataklysm's least liked records, it's my personal favorite. Plus "The Renaissance" is one of my all-time favorite album closers -- that quasi-d-beat shit makes me wanna punch a demon-alien in the nuts.
Track listing:
1. 1999:6661:2000
2. Manifestation
3. Stormland
4. Breeding the Everlasting
5. Laments of Fear and Despair
6. Astral Empire
7. Gateway to Extinction
8. Machiavellian
9. The Renaissance
You'll never see what they see
Paradise is only a dream for the weak
You might also like:
Abramelin - Abramelin (1995)
The Chasm - Deathcult for Eternity: The Triumph (1998)
Posted by DEAR_SPIRIT at 9:37 AM