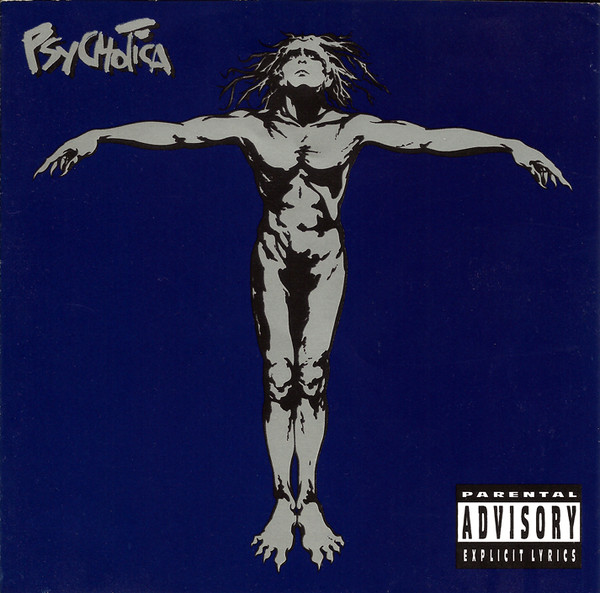 [Editor's note: I think a demon possessed my body and mind while I was writing this. Or I blacked out. Why, of all the albums in the world, over 3,000 of which I have posted here, is this the album to which I would devote a legitimate write-up? Upon completing this post a little over a month ago, I immediately decided to shelve it out of sheer embarrassment. But shit, it's Halloween season, and I don't have anything else to post today. Enjoy.]
Psychotica were an NYC band whose brush with success can largely be attributed to scoring a spot in Lollapalooza '96, at which vocalist Pat Briggs presented himself as a glammed-up Marilyn Manson in silver spandex and poached a bunch of their mall-dwelling fans, myself included. (It's worth noting that Marilyn Manson had yet to go glam at this point, and I've always wondered if Psychotica had something to do with that eventuality. It's also worth noting that Marilyn Manson is a piece of shit.)
Musically, it's a fusion of alt, glam, goth, and hard rock that's bolstered by some pretty fucking weird choices. In addition to including a cellist, there's a second vocalist named Reeka who, despite being Swedish, delivers her demonic, hyper-rhythmic verses in a vaguely Jamaican accent. Meanwhile, Briggs spends most of the record delivering an actually pretty powerful, Bowie-aping performance; and a series of brief interludes gesture towards chamber music and 90s electronica.
It's weird, messy, and memorable, but make no mistake: it is not "good." My enjoyment of this record probably represents a lapse in taste on my part, and my posting of it doesn't mean that I think you're gonna like it. There are some very unfortunate moments. Like when he starts off "Stop" by snarling "Sex and drugs and rock and roll are not enough to feed my soul" over a bargain-bin rawk riff -- in fact, "Stop" flat-out sucks an entire ass -- or when Reeka appears to rap on "What Is God". The lyrics aren't great. "The Future" is a baffling vignette built around a generic techno beat and the sound of an old-school dial-up modem. And generally, they seem overly eager to say "fuck" a lot, like a bunch of edgy 13-year-olds.
But none of this has stopped me from coming back again and again over the years. The DEVO cover? Love it. A dejected power ballad based on The Little Prince? Love it more. That deranged reggae breakdown in "Starfucker Love"? Fucking love it even more. And "Ice Planet Hell" fully slaps. It's hard to imagine anyone discovering and enjoying this record in the year of our lord 2021, but I've been listening to a bunch of early adolescent favorites, I have spare time, and I have a music blog, so this is what you get. What's next, Hagfish? Trip 66? I listened to a lot of questionable shit back in the day!
Postscript: In working on this post, I discovered this ancient, Tripod.com Psychotica fan page, last updated in August 1998, preserved on the web like a mosquito full of dino-DNA in amber. Too bad the guestbook isn't viewable, I bet there was some real gold in there.
Track listing:
1. Ice Planet Hell
2. The Worship
3. Starfucker Love
4. Little Prince
5. Stop
6. The Call
7. Freedom of Choice
8. 180°
9. The Sleep
10. Flesh & Bone
11. Blue Fear
12. What Is God
13. La Chocha
14. Barcelona
15. The Future
16. Cybernation
17. New Man
18. The Awakening
Jesus kissed me on my thigh
And Jesus loves me all the time
More 9th-grade favorites:
GWAR - America Must Be Destroyed (1991)
Machines of Loving Grace - Gilt (1995)
Posted by DEAR_SPIRIT at 11:15 AM