Wyrd - Of Revenge and Bloodstained Swords (2001) 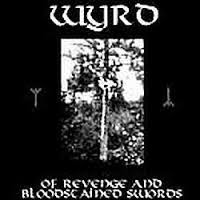 Though they've consistently made intriguing music over the years, Wyrd (from Finland) are IMO a band whose ambitions have at times outpaced their abilities. To me, their best moments often come when they practice restraint, such as on the relatively brief, five-song, early-Katatonia-worshipping The Ghost Album, and here, a lo-fi, half-hour-long demo wherein they add a touch of Filosofem-era Burzum to their epically sorrowful Pagan black metal.

NOTE: Their new album, Death of the Sun, hammers home my point. The longest song is just over 7 minutes long, and it's easily one of their most satisfying records to date. Get it from their label here, and be glad that you did.

We remove their icons, we crucify their priests to their own crosses
We'll burn their holy scriptures and sink their dismembered corpses
to the marshes of the proud northern woods